Here is the latest Central Florida foodie and dining news to report on, including several charity events, food events, restaurant and grocer openings, and so much more.

First off, a quick reminder that Visit Orlando’s Magical Dining has been extended to October 31, 2020, so you still have time to enjoy those delicious $35 prix fixe menus.

For three consecutive Mondays in October, starting with National Pulled Pork Day on Oct 12 (today), Orlando-based Sonny’s BBQ will donate $1 to No Kid Hungry for each Pulled Pork, Sweet Carolina, Whole Hog and Sonny’s Cuban sandwich purchased, which can provide up to 10 meals to kids in need.

The restaurant group will also give away free pulled pork for a year to five lucky winners. Fans can enter to win the grand prize on the contest’s website from Monday, Oct. 12 to Monday, Nov. 3.

In honor of National Pulled Pork Day, we’ve created a limited-time menu and partnered with @nokidhungry to help provide up to 680,000 meals to kids in need.* Visit the link in our bio to find out how you can join in on this celebration every Monday in October, beginning 10/12.

Kelly’s Homemade Ice Cream will celebrate the 3rd Anniversary of its Ferncreek Ave location on October 13 with Buy One Get One Free ice cream cups, sugar or cake cones from 6-9pm.

A post shared by Kelly’s Homemade Ice Cream (@kellyshomemadeicecream) on Oct 1, 2020 at 8:01am PDT

The four-course meal is $45 (+ tax/gratuity), and $10 from the sale of each menu will go directly to the charity at the end of the promotion. Reservations are recommended and can be made at NewStandardWP.com.

The next Courses for Causes dinner will benefit the Adult Literacy League, and will run Oct. 20 through Nov. 1.

? Dine Out to Benefit Edible Education Experience! ? We are so pleased to partner with @thenewstandardwp for their "Courses for Causes" event, which starts today and continues through Oct. 18! Guests will enjoy a delicious, four-course dinner for $45++, and $10 from the sale of every menu will go to benefit our mission of creating seed-to-table experiences for students and the community. Visit our link in bio to view the full menu (vegetarian options available) and reserve today!

The Spanish tapas restaurant Tapa Toro is hosting its first cooking class for the fall season on October 15. Enjoy an evening of safe cooking and eating around the paella pit as the restaurant’s talented chefs guide you in creating some of their favorite recipes. Cost is $54 (+ tax/gratuity).

Our En La Cocina cooking classes are back! ? Join us each quarter for an intimate hands-on experience with our chef. Click the link in our bio to view the dates & menus available and buy tickets! Seating is limited to 12 people per class. ? ? *For safety reasons, all guests are required to wear gloves and face coverings while cooking, and can remove these when it's time to eat their creations! All items are made by each individual so no sharing is involved.

Orlando Meats has announced they are relocating to Winter Park in the former Todo Sushi space at 1035 Orlando Ave. They’ve gotten too big for their Ivanhoe Village location and the new space will give them more seating, parking, and space for a full bar.

Partners/spouses Eliot Hillis and Seth Parker also plan to offer a wider menu, including pasta, house made hot sauces, and items from their Recess Pizza concept. Congratulations to the duo for this next chapter!

The 11th Annual Día de los Muertos & Monster Event opens at CityArts in downtown Orlando this Thursday, October 15, with an outdoor dining experience. Food is provided by Tamale Co. Mexican Street Food, and includes one shared appetizer, one box meal per person, one drink per person, and a guaranteed entry time to the exhibit. A table for two starts at $70.

Bulla Gastrobar in Winter Park is hosting a Wine Dinner on Thursday, October 15. Enjoy a five-course Spanish menu with wines from Grupo Bodegas Palacio. Cost is $80 per person, sold in pairs for social distancing, and diners must be 21+. 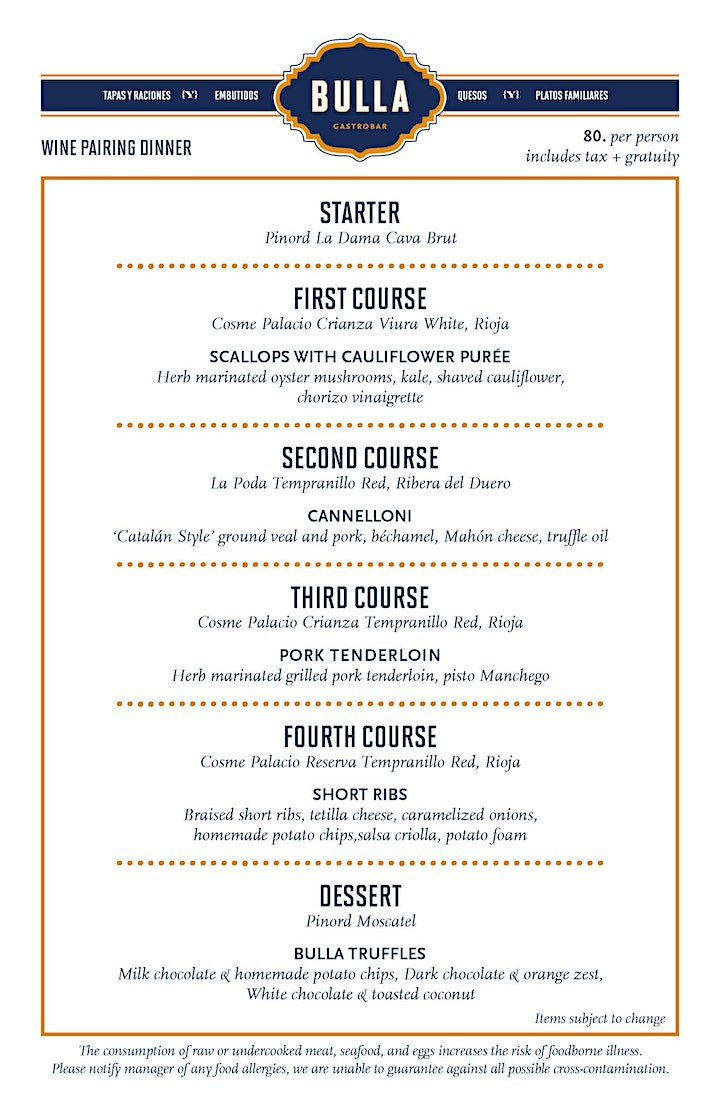 Enjoy mouth-watering dishes from some of Central Florida’s premier restaurants, domestic and international wine, beer & liquor stations set up throughout venue, and live entertainment. There will also be a silent auction.

Tickets are $125 per person for general admission, and $250 for VIP, which also includes early entrance, a table seat, access to special wine and cigar/whiskey areas, and more.

A portion of the proceeds from gala go directly to the participating restaurant partners to assist in their recovery during this pandemic.

Join the RAPCF’s Monster Mash, a Mask-for-Aid Ball for Restaurant Recovery featuring mouth-watering dishes from some of Central Florida’s premier restaurants, domestic and international wine, beer & liquor stations set up throughout venue, and live entertainment during event.  Online auction presented by participating restaurants and allied partners and silent auction night of the event. Fancy dress is not required but encouraged. There will be a prize for best costume! ? Portion of proceeds from gala go directly to the participating restaurant partners to assist in their recovery. Tickets are advance purchase and can be purchased at www.MonsterMashOrlando.com Space is very limited due to social distancing and will sell out fast! #rapcf #monstermash #monstetmashorlando

À La Cart Orlando is hosting PumpkinFest from October 23-31. Each of the food vendors are going to be whipping up some unique pumpkin dishes to accompany a variety of available pumpkin brews.

?Socially distant sunsets at ÀLC ? . . Covid Update: We allow on site alcohol consumption if you are seated and eating. We offer ALL products, both food and drink, to-go. Beer can be ordered in person, by phone or online (link in profile) 21+ only. Check food vendors Instagram bios for online ordering links. . Masks are required at A?LC when walking around and ordering, they may be removed while seated and dining. And thank you for social distancing. ?? . Service Animals only. We recommend ridesharing and carpooling. Please be safe, and do not drink & drive. If overflow parking, please observe all parking signage and respect our neighbors (Einstein's is available after 4pm). . . . . . #milkdistrict #orlando #sourbeer #sour #orlandofl #floridabeer #orlandoflorida #orlandofoodie #orlandobeer #orlandoiswonderful #stufftodoinorlando #orlandoyes #orlandodatenight

Orlando’s Milk District is offering a coupon book early in November to those who join its Stay Milky membership program in October, with discounts available at a variety of businesses like A La Cart, Bad As’s Sandwich, Dixie Dharma, Eola General, Gringos Locos, MX Taco, and Pom Pom’s Teahouse and Sandwicheria, among others. Memberships start at $35.

Stay Milky ? Join The Milk District as a residential member during the month of October will receive a coupon book early in November with hundreds of dollars worth of deals they can use throughout the neighborhood. Link in our bio.

On October 20, Orlando’s SoDo District is hosting a Pop Up Dinner To-Go event. The three-course menu is provided by Baos Castle and The Aardvark, with drinks by Orlando Brewing and Swirlery Wine Bar, and includes a pumpkin. Cost is $40 per person. Menu at the link.

Plenty has opened at The Joinery food hall in Lakeland. The Mediterranean-inspired concept offers hearty and healthy bowls, platters, and protein skewers (both plant + animal-based).

My Indi Kitchen has also opened in Lakeland, serving up Indian cuisine at 2810 Lakeland Highlands Rd.

What do you call baked cheddar grits, smoked pork , cole slaw, bbq sauce and pickles ? The Pork Stack and it’s our special today . See you soon !

Cowboy Dips & Chips, a national quick-service concept based in Ohio, has opened two area locations at Aloma Bowl in Winter Park and Boardwalk Bowl in Orlando.

Best selling dips Roast Beef and Pastrami are available at the centers, along with all three of the concept’s homemade chip flavors including Salted, BBQ and Salt & Vinegar.

The centers are also offering a special deal called Cowboy Dips & Chips Plus Sips, which will include two dip sandwiches, two side of chips, and two domestic beers or non-alcoholic beverages for $24.

It's game day! Take advantage of our Dips & Chips + Sips Tailgate Special and choose 2 dips, 2 chips and 2 sips for $24.

It’s Saturday and this should be your lunch goals!!! #eatfreshfeelfresh ?:#jennyhawk

Charley’s Steakhouse on I-Drive in Orlando reopens on October 15, and to celebrate, they’re giving away a colossal Madagascar shrimp when you order a filet mignon.

We’re opening Charley’s Steak House on 10/15 and everybody gets a colossal Madagascar shrimp with your filet mignon compliments of Charley. Available through 10/18

Rokka’s Market has opened at 6507 Old Brick Road in Windermere, offering a Brazilian grocery, butchery, and bakery, along with a restaurant offering picanha bbq, sausage, rice, beans, and more.

Welcome! We're arriving in Florida for you to dive in a culture that's rich in natural resources, diversity and also fascinating cuisine. Very well seasoned, traditional Brazilian food is one of the most tasty and peculiar in the world. ? Rokka's Market has prepared a special space for you to immerse yourself in Brazilian culture through food. Restaurant, butchery, bakery, horticulture and grocery store, all in one place. Additionally, you can enjoy other delicacies from South America, Portugal and Spain. Get ready to be amazed by exotic flavors and the unique brazilian's energy, without leaving the USA. Brief opening in Windermere, wait for it! ? ? Opening week: October 5th – 11th ? ? 6507 Old Brick Road Suite 120-130 – Windermere ? ? Opening hours: ? Market – 8am / 9pm Restaurant – 11am / 10pm ? #RokkasMarket #Florida #Windermere #WindermereFlorida #FloridaLife #BrazilianFood #CentralFlorida

CHEF NICK SIERPUTOWSKI TO LEAD THE KITCHEN TEAM AT THE NEW OUTPOST IN MAITLAND[ORLANDO, FL, October 2020] — The former…